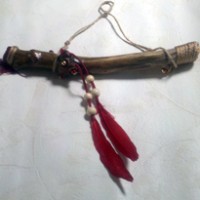 The Talking Stick has been used for centuries by many Native American tribes as a means of respectful, just and impartial hearing when a discussion or debate takes place — especially when a judgment or decision must be made. It was commonly used by the chief or elder in council circles to designate who had the right to speak. The speaker holds the talking stick and all others must listen without interrupting until their turn comes to hold the talking stick.

Some tribes used a talking feather instead of a talking stick. Other tribes might have had a peace pipe, a wampum belt, a sacred shell, a totem stick, or some other sacred object by which they designated the right to speak. Whatever the object, it symbolized respect for free speech and assured speakers the freedom and power to say what was felt in the heart without fear of reprisal or humiliation.

Usually the talking stick (or other symbol) is a relatively small item easily passed around the council circle. But some tribes had talking sticks that were as much as six feet long. In these groups the talking stick was usually held by its end, in one hand, and at arm’s length. This was a natural way to limit the length of a speech.

Traditionally, the speaker remembers that he carries within a sacred spark of the Great Spirit, and is therefore also sacred. If he feels he cannot honor the talking stick with his words, he should refrain from speaking for a time. In this way he avoids dishonor to himself and does not desecrate the symbol of the talking stick by hurtful and angry words. When someone does dishonor himself with his words, that person will be asked to leave the council circle until such time as he can soften his words with love and understanding.

Symbolic talking sticks help people to share the spirit of understanding with the heart as well as the mind. These can be created and used in a variety of ways to serve the purpose of facilitating discussion. Authentic talking sticks (as with all things Native American) are highly symbolic, they vary widely with each region or tribe, and are very individual in nature while still preserving a commonality of purpose.

Eskimo tribes, for example, use a talking stick of simple construction with only the family colors painted on it. The tribes of the Southwest use sticks that are more ornate and have pouches, beads, feathers, bone, or pieces of hides from animals of spirit attached to them, which have important meaning to the tribe, artist or individual.

The one commonality of most authentic talking sticks is that they carry the same four symbolic colors. These signify four animal totems, the four seasons, and four of the sacred directions. All symbolize powers of the Universe as observed in Native tribes.

The original source of the stick is the tree, which is considered one of the children of the Earth Mother. The tree is connected to Mother Earth by its roots and therefore the stick symbolizes our rootedness in Mother Earth; putting us closer to her.

In Native American practice, all councils or group discussions must start the stick at the point of the compass that corresponds to the present season. The stick is nothing unless the feel of the stick is personal and comfortable in ones hand. The speaker gently looks for a point of balance that makes the talking stick feel like part of himself or herself before speaking. This also serves to calm strong feelings that may otherwise lead to dishonorable speech.

The Talking Stick can be a welcome mediator in any family, tribe, team or other group or organization that has common goals.

We have a current one-of-a-kind assortment.  See “Talking Sticks” in our MEDIA/Photo gallery!

You can also commission a talking stick based on personal preferences!