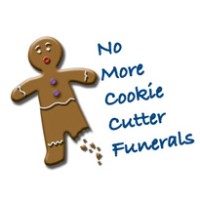 A Certified Funeral Celebrant is a person who seeks to meet the needs of families during their time of loss and grief.  They serve by providing a funeral service that is personalized to reflect the personality and lifestyle of the deceased.

What Does a Celebrant Offer?

Why use a Certified Celebrant?
The training for Celebrants, as established by In-Sight Institute, seeks to provide the most comprehensive and sensitive training available for people wishing to develop this as a profession or to add to their current job description. It is important that a family knows that they are being served by someone who understands the process and is prepared to offer the very best funeral, memorial, or celebration possible.

What Does It Cost?
Celebrant fees may generally be higher than fees charged by clergy for performing a funeral, and can range widely from a minimum of $200.00 and up depending on type of service, location, travel and other expenses. But with the fees you pay, you can expect your Celebrant to spend approximately 10 hours in preparation for a memorial service or funeral and make a variety of resources and approaches available to serve your needs.

When Bing Crosby sang the song “Pennies From Heaven” years ago, he couldn’t have been thinking about little Penny Anne Rikaro.  She wasn’t born until March 15th, just a little over two years ago.

She was a surprise to her parents, who talked about being “over the hill” and “done with having kids.”  But as far as Stan and Sara Rikaro were concerned, there was no doubt that one of those pennies from heaven had arrived to enrich the lives of the Rikaro family.  Mother, Sara, took one look at the full head of hair too dark to be blonde like hers and her daughter’s, and too light to be the color that her husband and son sported and made one of the wisecracks she’s known for.  She said “I’ll bet she’s going to be our little copperhead!”

Not to be outdone, Stan said, “Then we should probably name her “Penny.”  And since the happy couple hadn’t settled on a name yet, the inspiration of the moment counted … and the name Penny stuck.  And, yes, the hair is flaming read … and forever curly.  Stan said there were times, though, when the name “Copperhead “… like the snake … might have been a better name … because Penny had a real bite when she was upset.

Somehow, though, Penny’s grandparents, David & Juanita Rikaro, never got to see that Penny.  They say she was always a perfect little angel.  That was also the report from her big sister, nine year-old Nicole … who babied her little sister so much that you might have thought she was Penny’s Mom instead of Sara.  Nicole was also Penny’s biggest teacher – despite the fact that their mom was the official teacher for the family’s home-schooling efforts.  It was Nicole who taught Penny to sing the ABC song and who (as a fledgling cheerleader) might have helped plant the seed of dancing in little Penny’s heart.

Penny was always dancing AND singing … and often with reckless abandon … and sometimes her wild whirling ,and twirling, and bouncing brought out the chivalrous spirit in her big brother, Alex.  He invariably appointed himself her protector – even when Penny annoyed him, or she was in trouble for the temper that their dad joked about.

Had Penny’s maternal grandparents, Paul and Lois Rash, lived to witness her birth and rapid growth into a two-year old dancing machine, they might have had other ideas about how she got there.  Grandpa Paul had often told story after story about the good old days when he fell in love with this beautiful dancer named, Lois.  As he tells it, he followed her all over New York City until she gave him a chance to be her “Number One Dance Partner” – when she wasn’t on stage.  They’d say (and Sara would agree) that Penny came by her performing spirit honestly … from her Grandma Lois … certainly not from her mother, who (in Sara’s words) has “two left feet and a frog croak where there is supposed to be a singing voice.”

Penny was infinitely inquisitive, with sparkling green eyes, a quick, bright smile, and an indomitable spirit that invited you into a magical world of wonder and surprise – even if she didn’t say any of the words that she knew way too many of to be only two years old.  And if you seemed unavailable for some new adventure with this precocious and bouncy little redhead, she would sometimes just turn her attention to one or more of her favorite stuffed animals and create whole new worlds with them!  Yes, this was a rare Penny, indeed!

In fact, her family knew that she was priceless … sort of like a certain 1943 mint penny that once sold at an auction for $73,000.  If you do the math, that works out to being over seven million times more valuable than one would normally expect a penny to be.

That gives you an idea how much the little Penny in the Rikaro household was valued, and how much she brightened their world.  In fact, the only time Penny’s shining presence dimmed was when she wasn’t feeling well … which wasn’t often.  That’s why everyone knew something was wrong when Penny was at first just not her usual bouncy self … but then complained that her ears hurt …  and then started coughing almost non-stop …  and couldn’t keep any food … or even juice in her little tummy.

By the time the third day of these sometimes intense symptoms had dawned, Sara was worried enough to take Penny to the hospital.

It was the flu, they declared; but they sent Penny home after a night in the hospital , where Sara had stayed beside her all night without sleeping a wink.  Penny seemed better the next day; but before what was probably going to be another sleepless night for her mother, Penny couldn’t be roused from a nap to take her medicine.

Big sister, Nicole immediately dialed 911 at her mother’s urging and the paramedics arrived in less than four minutes from the nearest hospital.  But complications from this particular bout of the flu were too much for the strong mothering instincts of the Rikaro women, too mean for the protective Rikaro men, and too venomous for even Penny’s legendary copperhead bite.

There are no words for the pain that all of us must feel – but especially Alex, and Nicole, and Sara, and Stan, and David, and Juanita as they recognize that they will only have pictures in their hearts of the dancer that Penny was rather than the one she might have become.

This particular “circle of life” leaves us shaking our heads in wonder, with no explanations for the loss of this beautiful ,curly-red-haired little pixie.  But as Sir Elton John wrote  — and sings so poignantly –  “Some of us fall by the wayside, and some of us soar to the stars … and some of us sail through our troubles  … and some have to live with the scars.”

Those of us who knew and loved this priceless little Penny, will “have to live with the scars” for a long time.  There will be no sailing through our troubles here.  But perhaps the song will offer us some comfort each time we hear it … especially as we imagine that Penny has soared to the stars.

And maybe a time will come someday when we will understand why Penny’s circle lasted only two glorious years.